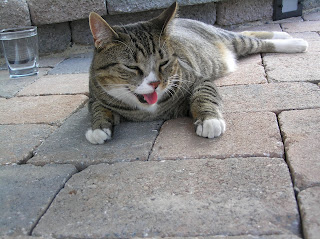 Life is good, with claws!
When we adopted our cats, Winston and Spencer, I really worried about my leather furniture.  Looking back now, I don’t see what the big deal was.  Especially when you know the facts about declawing animals.  It’s inhumane, and I value living things over inanimate ones.  After all, I don’t cut Emma’s fingers off when she breaks or damages something.  The thought popped into my head today when I was tidying up the family room and noticed that my leather ottoman has seen better days.
All my life I was never a “cat person”.  I love dogs, and my parents exposed me to three four-legged members of the family, and they all had their different unique and loving personalities. 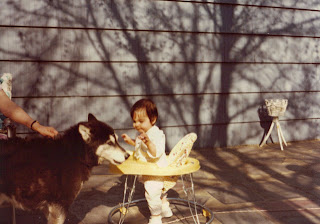 There was Champion, a siberian husky.  He passed away from old age when I was five.  Word has it he used to bring home girlfriends from the neighborhood almost daily. 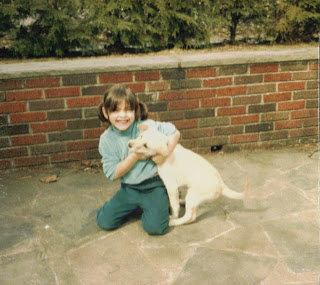 Then we had Nugget.  This is a really cute picture that was taken on the day we got her (don’t laugh-this was the early 80’s and I was super excited about our new pup).  She was put down right before final exams in high school, after she her cancer became too much for her to bear. 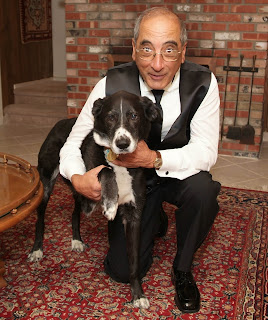 The first semester in college, my parents adopted Lucky.  A fitting name, because you could see his rib bones, he was so emaciated.  He went on to live the life of a King, and even traveled with them to Florida for several years.  He passed away last year.  I love the photo of him with my Dad on my wedding day.
A few months later, they adopted Hannah.  I don’t have a photo handy.  Notice the pattern?  My parents were never without a dog.  I think they feel incomplete without one.
When my husband and I felt incomplete, but not incomplete enough to have kids yet, we adopted Winston and Spencer.  We had debated over it for awhile because I wanted a dog, but I eventually caved in to getting a cat because I wasn’t so comfortable with leaving a dog home home alone all day either.  But I needed to have a pet again, and Wincie and Spencie were a package deal.  They’re brothers.
They are the coolest cats.  Well Winston is more cool… 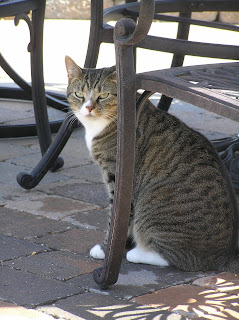 …and Spencer is needy but lovey. 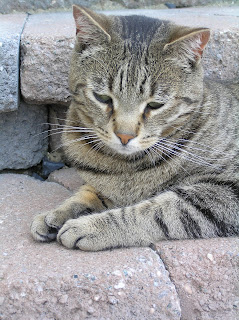 Winston will play fetch – he’s the most dog-like cat I’ve ever met.  Spencer likes to knock things off of counters and ledges and then just stare at it and move on to the next thing.  Most recently my favorite moisturizer in a glass bottle.  He’s a pain in the butt, but I still love him.
I think we might decide to get a dog at some point, but for now I’m enjoying the freedom of not having to do the obligatory walks and pay extra attention to a dog.  It’s nice to be able to leave for a weekend trip and know that they’ll be okay.
But I still feel guilty leaving them.  And I think those scratches on my leather ottoman add character.