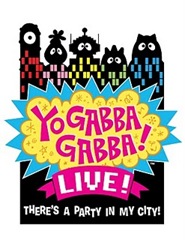 You might recall a few months back when I posted about Emma’s experience with a DJ Lance imposter.  She was star-struck then, can you imagine how excited she’ll be? Fresh off a triumphant sold-out tour debut, a headlining performance at The White House, a critically-acclaimed, chart-topping album, and an appearance at Coachella that garnered rave reviews from spectators and media alike, DJ Lance Rock and the cast of YO GABBA GABBA! are heading back on the road with YO GABBA GABBA! LIVE!: THERE’S A PARTY IN MY CITY! to play to enthusiastic fans on a 60-city tour across North America.  Today’s hottest live show for families will make stops at top theaters, arenas and amphitheaters throughout North America, starting August 27 in Bethel, NY and ending in Dallas, TX on December 12.  YO GABBA GABBA! LIVE!: THERE’S A PARTY IN MY CITY! is produced by S2BN Entertainment in association with Wildbrain Entertainment and The Magic Store.

Champions on the stage and in the community, the Gabba gang will participate in various service projects aimed at building homes and hope in the cities they visit during their four month journey across North America.  In addition, $1 from every ticket sold will be donated to the Habitat for Humanity local affiliate in each tour city, to further their homebuilding efforts.

For complete tour, ticket, and VIP package information, visit www.yogabbagabbalive.com.   Children under one year of age will be admitted free to sit on a parent’s lap.

I was not compensated for this post, but I will be posting my review of the tour later this summer.