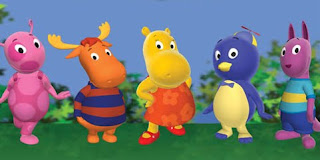 For the longest time my daughter would only watch Yo Gabba Gabba.  I’m thankful that she’s starting to expand her horizons.  The Backyardigans have great songs and the graphics are amazingly realistic for a cartoon; not like the now archaic cartoons that I remember watching.  It’s no wonder this is an Emmy® Award-winning show.

In the new DVD,  The Backyardigans: Operation Elephant Drop,

kids can join Pablo, Tyrone, Uniqua, Tasha and Austin as they use their imaginations to take them on epic adventures.  The DVD features four episodes: Elephant on the Run, The Magic Skateboard, The Flipper!, and Super Team Awesome!

Elephant on the Run
Park Ranger Tasha has a very important job for delivery agents Tyrone and Pablo — to get an endangered Indian elephant safely to the Dandeli Wildlife Sanctuary and to avoid the bad guys. Music Genre: Alternative Rock

The Magic Skateboard
Tyrone really wants to be a great skateboarder. He may not know all the tricks yet, but he’s going to compete in the Show-Off Showdown. Once he finds the magic skateboard, even his top competition takes notice.
Music Genre: Forró

Super Team Awesome!
Tyrone is a tour guide for the world’s only lava geyser, Old Gushie. When a loose boulder in the cavern threatens to cause a geothermal disaster, Tyrone calls for help. Not one, but three superheroes come to save the day!
Music Genre: American Country Rock

No compensation was received for this post, but I did receive the product discussed free of charge in order to facilitate my review. All of the opinions above are 100% my own.