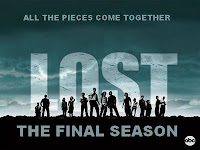 I don’t even know where to start.   Sayid has been one of my favorite characters of the show.  In the alternate timeline, his love Nadia is married to his brother.  Apparently at the urging of Sayid himself.  What the hay, might as well keep it in the family, eh?  They still seem to have the same connection, though.  But in the ATL they still can’t be together, just for different reasons.

We saw more path-crossing in the ATL, with Keamy and Jin.  Guess Sayid’s brother wasn’t the only one who owed those loan sharks money.

Ironic that Sayid was drowned in the temple by Dogen the same way that Sayid was.  After their exchange, I thought Sayid was going to surprise us.  He fell for it, and has proven he will take any and every chance to see Nadia again.  Dogen was the key, for some reason he was what was keeping smokey out, other than the ash.
I really thought that Sayid was going to stick with him for a second, after Dogen poured his heart out regarding his dead son.  It seems both Jacob and Smokey are making promises of resurrection to get folks to take sides.
Questions/Comments:
Best quote of the night:
“She just strolled in here, acting all weird. Still hot though.” -Miles

If you have a LOST blog post, paste the link below.  And don’t forget to enter my giveaway for a LOST t-shirt!