The same thing happens every time I make cupcakes for my kids’ birthday parties. The kids only eat the icing. “I should just serve cups of icing to the children,” I say every single time. Well I’ve never known a child to not eat the icing and most of them love brownies, so this idea is pure genius: Brownie “Ice Cream” Sandwiches.

Only it’s not ice cream between those two brownies; that’s the best part. The “ice cream” is really icing but with the festive look of an ice cream sandwich. Two things children love in one bite, and without any of the melting. A simple, yet clever idea. Why did I not think of this?

I wish I could take credit for this brilliant idea, but I cannot. I found it in this beautiful new book called Eat More Dessert by Jenny Keller. She has received accolades from stars like Tori Spelling, and I can see why. Not only are the recipes and ideas awesome, but you can see how much care went into making the book beautiful between the breathtaking photos and delicate page backgrounds. For the brownies Jenny used a jelly-roll pan, but I decided to use my trusty Chicago Metallic pan which I love. It creates pre-sliced brownies, so no cutting needed. 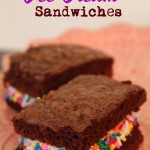 Recipe reprinted with permission from the author of Eat More Dessert.

We received a complimentary copy of the book. Post contains affiliate links.