Closed – the winner is Felicia K.!
When I was pregnant and registered for all of the essentials, I knew I wanted a diaper pail in the nursery.  I found one that didn’t require any special bags, and I was sold.  I thought, why should I spend all of that extra money on refill bags?  Well, I learned the hard way.  That low-maintenance cost diaper pail I had chosen wasn’t effective at containing odors, and it got to the point where we stopped using it entirely.

Playtex recently shipped the Diaper Genie II Elite™ Disposal System to my home.  With a little elbow grease, I was able to assemble it and I put it to use right away.  This has got to be the Cadillac of all diaper disposal systems.

First, it’s user friendly and hands-free.  The top opens by stepping on the pedal, and I can use it for diapers as well as trash like clothing tags and tissues.  Other than being stinky, my old pail was the complete opposite of my new Diaper Genie II Elite™.  It required that I rotate the handle 180 degrees each time, and smaller pieces of trash would get caught in the mechanism.  Frustrating, to say the least. 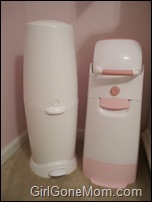 Also, the sheer size was a major difference.  The Diaper Genie stands taller which means there is less bending required, and more space for diapers.  Of course, none of these details would matter if the Diaper Genie II Elite™ didn’t keep the nasty odors under control.  And I admit I had my doubts after being disappointed with my first diaper pail.  How do they do it?  The bags have antimicrobial protection that inhibits odor-causing bacteria from forming in the first place.  Another factor in keeping odors in check is the patented double-lock pail design and multi-layer refill seals in both odor and germs.  I’m not sure how I ever lived without this pail.  Playtex really thought of every last detail.

Playtex sent over additional tips to help maintain a healthy and germ-free nursery, as written by Dr. Benjamin Tanner: 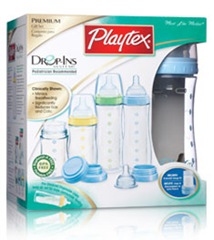