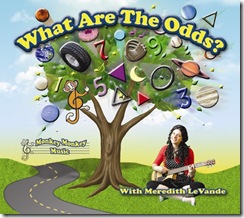 Contest Closed
Whether we’re walking around the neighborhood, riding in the car, or just chilling out at home, there is often music involved.  In the summertime we find ourselves spending a lot of time in the backyard and I play music from my children’s playlist on my iPod for Emma.  I’m so glad that she really enjoys music and I like to encourage her love for this art.  I’m happy to add Meredith LeVande’s fun music to our playlist.

Ms. LeVande writes the very music that she sings.  She’s based in New York City, but this gal is more than street smart.  She holds undergraduate degrees in Women’s Studies and English, she also has a master’s degree in music and a law degree!  That’s one driven lady, if you ask me.  I think this is what makes her music so well-rounded.  Her brand is Monkey Monkey Music, which is aimed at “putting the child back into children’s music.” 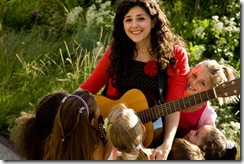 In 2005, Monkey Monkey Music’s first album was a smash hit.  It was a Parenting magazine “Pick,” and was featured on Sirius Satellite Radio.  Since that time Meredith LeVande has been performing at more intimate gatherings, and she’s built an excellent relationship among young families in the tri-state area.

The new Monkey Monkey Music CD is called What Are the Odds?  It will be officially released on August 31st. It is a nice balance between baby music and songs for older kids so it fits the entire family quite well.   It’s fun and upbeat, and Emma is working on her dance routine tirelessly.

Here are the links needed for some of the EXTRA ENTRIES (You may want to complete before filling out form).
-Like Girl Gone Mom on Facebook
-Follow Girl Gone Mom twitter
-If you follow me on twitter, you’ll receive one extra entry per day for tweeting this:
#Win the new cd by Monkey Monkey Music and Meredith LeVande – http://bit.ly/cWeFMC Appropriate for kids of all ages! @girlgonemom #Summeressentials

No compensation was received for this post. I received a copy of the CD in order to form my opinion. Contest closes at Midnight EST on August 10th. The winner will be selected using Random.org. See giveaway rules before entering. GOOD LUCK!