Kaskey Kids was founded by Bruce and Christy Kaskey when they realized that their kids were happiest playing when sports were involved. It’s not always possible to play outdoors, and since tossing a football in the house just isn’t practical, they noticed a niche in the market for high quality sports action figures. Bruce and Christy say, “We sincerely believe that your children will enjoy playing with KaskeyKids as much as ours have.”

Kaskey Kids sent us their Baseball Guys, Red Vs. Blue: 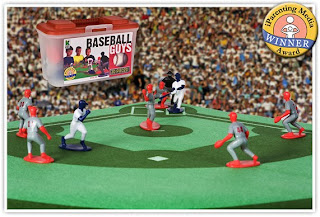 How appopriate this year with the Yankees vs. Phillies world series! The set includes 24 – 2 1/2″ players, 1 umpire, and a realistic changeable scoreboard. Let the kids use their immagination as they set up the game on a 24″x24″ felt playing field that’s also included. It even came with an Instructions/Playbook booklet that teaches kids the rules of America’s favorite pastime. Reading through it, I learned a few things myself! I’ve never seen anything that compares on both creativity and quality, and apparently some other folks agree. Kaskey Kids products have won many awards and have been featured in the press. This would be the perfect holiday gift for any sports fan, of any age!

BUY IT! Use the promotion code “Holiday” for 20% your entire order at Kaskey Kids!

Absolutely no compensation was received for this review. The sponsor sent me the product, and I offered my honest opinion.