**Contest Closed**
Ever since becoming the owner of two cats, I worry about people being able to tell we’re cat owners just by walking in the door.  Does my house smell like cats, or worse — kitty litter?  People become so accustomed to their own odors that they don’t notice them, and I wonder if I’m one of those people that has a smelly house without realizing it.  Some odors are undeniable.  Like when I’m halfway down the stairs, I choke on the kitty litter fumes coming from the basement. 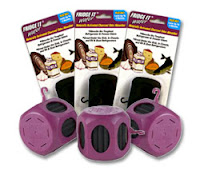 We’ve tried using baking soda to eliminate the odors both in our refrigerator and in and around the kitty litter box.  Either our odors are worse that most, or that stuff just doesn’t work!  Bruce from Innofresh sent us the Fridge-It Cubes and the Pet Odor Absorbers.  “Please put these products through your tough odor tests,” he said.  Well we did as we were told and I am truly amazed at the results.  I made a large ham for Christmas dinner and there was a lot left over when the day was done.  This made for very stinky fridge, but after I placed a Fridge-It Cube inside the fridge I noticed a dramatic difference within hours.  I don’t think baking soda has ever given me the same results.  The Fridge-It is even powerful enough to remove dead mouse odors from behind walls.  It’s no wonder the Fridge-It has received accolades from The Food Network and NBC. 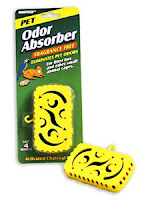 Same story with the kitty litter box.  I didn’t think there was a product out there that could help eradicate that smell.  I used two Pet Odor Absorbers for our large litter box.  Two cats warrants two odor absorbers, I think!  I was pleasantly surprised when I checked the litterbox the next day – it smelled SO much better.  Needless to say, I did not choke on the fumes as I usually do.

The key to making these products effective is the activated carbon, which permanently eliminates odors, instead of masking them as most products do.  Innofresh products, which are manufactured in the USA, are not only effective but also eco-friendly, chemical free, fragrance free.

BUY IT!  Innofresh has offered a special coupon code you can use for 10% off their products, BK409B.

WIN IT!  Someone will be lucky enough to win a 6-pack of Fridge-It odor eliminating cubes!

After this mandatory entry is completed, help yourself to extra entries:

No compensation was received for this giveaway post. The company provided the product sample and I offered my honest opinion. Contest is open to US and Canadian Residents and closes at Midnight EST on January 31st. The winner will be chosen using Random.org. Please leave your email address either in your comment or make sure it is listed on your profile page so that I have a way to contact you. See the giveaway rules located here before entering. GOOD LUCK!