Yesterday was my husband’s actual birthday, but today I threw him a surprise party. It went off without a hitch, though he did notice that I was cleaning the house extra good. Hey, that’s normal…ish. :) I even made the bed, because without fail someone ALWAYS wants the tour.

I left an outline for my sister-in-law as to what neighbor had the food/cake and left the decorations, plates and such for her to set up. To get him out of the house, we took the babe for pictures with Santa and then to a few stores before I called home and found that everyone was there, waiting. So I turned on the attitude and rushed him home. Of course he wanted to go here and there on the way back (for Pete’s sake!), and I had to keep talking him out of making pit-stops. He noticed the cars parked a few houses up and smirked when we pulled into the driveway. Then as we walked in the laundry room from the garage one of the babies inside let out a cry. All I could do was laugh and say, “oh, who’s here?”

He’s a little bummed to be turning 40, but I still couldn’t resist and had to get the “Over the Hill” cake from Costco. I don’t think he looks a day over 39. 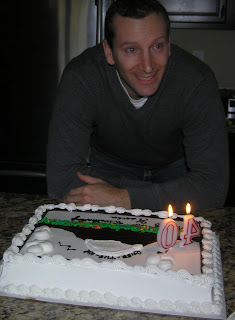