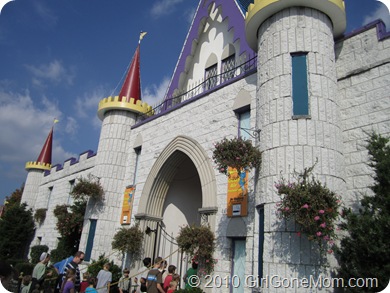 I remember passing by Dutch Wonderland on the way to visit Pennsylvania’s Amish Country a few years ago.  This was pre-parenthood, so I had no good excuse to visit the theme park then, but I still couldn’t help but wonder what existed beyond the castle’s impressive walls.

One of the many perks of being a parent is the opportunity to relive your childhood again from your child’s perspective.  So the weekend before last, we drove about two hours west so that we could spend an entire day at Dutch Wonderland as a family.  Located in Lancaster, Pennsylvania, this theme park is the self-proclaimed “Kingdom for Kids”.

I was glad to see that the parking is free at Dutch Wonderland.  It’s hard to find a theme park that doesn’t charge at least $15 or more to rent a tiny space in the parking lot for a few hours, so this was a very pleasant surprise.

But we did get off to a rough start upon our journey through the castle.  The sandwiches in our cooler were confiscated, and my husband was ticked.  Obviously, I know many parks want you to buy the food offered beyond the gates, but our daughter can be picky so it was a major bummer having to re-plan her lunch on the fly.  It was especially disconcerting later when we saw a woman carving her fruit with a sharp knife inside the park while seated for a performance.  You’d think that would have been a bigger concern than a turkey sandwich!  That said, Dutch Wonderland does permit you to leave the park and return later which is nice.  It’s just usually more trouble than it’s worth when you have a crew of kids to manage. 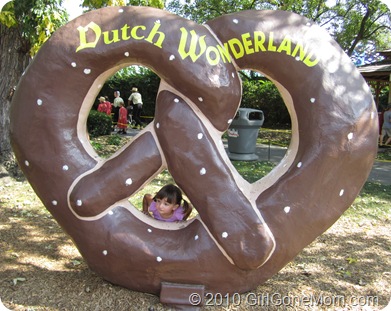 The first ride we headed to was the Merry-Go-Round, as usual!  And as it normally goes, Emma cried when it was done.  After the first fun ride of our day-long adventure, we took advantage of some photo opps like the Dutch Wonderland pretzel and our Amish Family Photo.  Always good for a few laughs, and guaranteed to yield great big smiles long after the day is done. 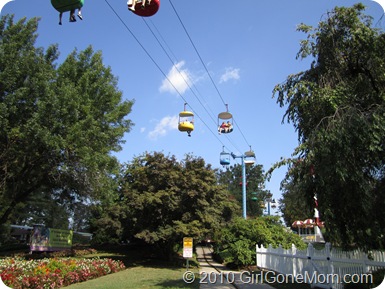 After going for a ride on the turnpike and then hitching a ride on the monorail, we decided we needed to check out a water ride on this especially hot September day. The Double Splash Flume looked like a blast.  The line was long, but we figured it would move fast.  And it did.  Until the ride started malfunctioning.  After waiting a really long time, the ride itself was a terrifying ordeal for our daughter.  Turns out, she’s not a fan of anything that simulates a roller-coaster ride.  Poor kid. 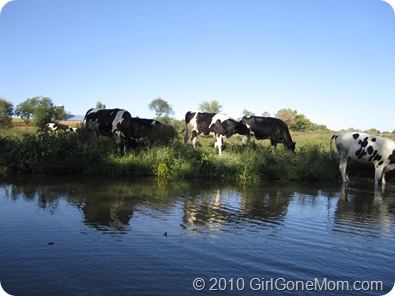 One of the things that I really loved about Dutch Wonderland is its beautiful surroundings.  You won’t forget you’re in God’s country with some of the magnificent views from inside the park.  Even while on the tugboat ride, we caught a glimpse of these cows drinking from the river we were floating on. 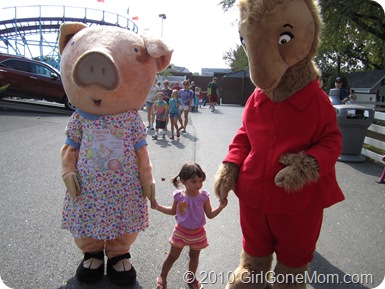 I think our favorite ride of the park was the train, Wonderland Special.  It’s one of the better train rides we’ve been on and it loops through different areas, up and down hills, etc. which keeps it fun.

Overall, we had a really great time at Dutch Wonderland.  This park caters to young kids which is really great.  So many times you visit theme parks and the young ones cannot go on many of the rides.  Not the case here.  There are plenty of attractions for the older kids too, and even those who are children at heart.  All of us kids, we’ll definitely be back for more fun!

No compensation was received for this post.  My family received complimentary passes to Dutch Wonderland so that I could write about my true experience there.